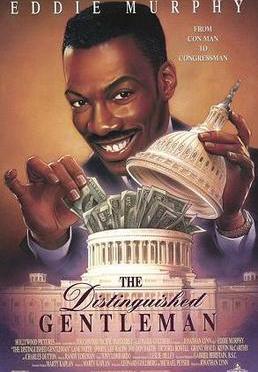 This is a good starting place to learn all about the insider politick’ing ways. Tell me if this does not ring true for todays circus they call congress in 2020.

Mean While In The Movie..

A Florida con man named Thomas Jefferson Johnson (Eddie Murphy) uses the passing of the longtime Congressman from his district, Jefferson Davis “Jeff” Johnson (James Garner) (who died of a heart attack while having sex with his secretary), to get elected to the United States Congress as a freshman Congressman, where the money flows from lobbyists. Omitting his first name, and abbreviating his middle name, he calls himself “Jeff” Johnson. He then manages to get on the ballot by pitching a seniors organization, the Silver Foxes, to endorse him.

Once on the election ballot, he uses the dead Congressman’s old campaign material and runs a low budget campaign that appeals to name recognition, figuring most people do not pay much attention and simply vote for the “name you know.” He wins a slim victory and is off to Washington, a place where the “streets are lined with gold.”

Initially, the lucrative donations and campaign contributions roll in, but as he learns the nature of the con game in Washington D.C., he starts to see how the greed and corruption makes it difficult to address issues such as campaign finance reform, environmental protection, and the possibility that electric power companies may have a product that is giving kids in a small town cancer.

In trying to address these issues, Congressman Johnson finds himself double-crossed by the Chairman of the Committee on Power and Industry, Rep. Dick Dodge (Lane Smith). Johnson decides to fight back the only way he knows how: with a con. Johnson succeeds and exposes Dodge as corrupt. As the film ends, it appears likely that Johnson will be thrown out of Congress for the manner in which he was elected, but he defiantly declares, “I’m gonna run for President!” then breaking the fourth wall.

Of course there was a critical response of negative to the movie.

The Distinguished Gentleman was released in December 1992 and went on to gross approximately $47 million at the domestic box office.[7][8] Critical reaction to the movie however was mostly negative. Roger Ebert of the Chicago Sun-Times liked the premise and what it had going for it, but criticized it for its “slow pacing”, despite it being a screwball comedy.[9] Owen Gleiberman of Entertainment Weekly called it “a sterile, joyless comedy, photographed in ugly, made-for-video close-up and featuring a farce plot so laborious it suggests John Landis on a bad day”.[10] eFilmCritic.com called it a “tepid Eddie Murphy political farce”, and the film currently holds a 13% “Rotten” rating on Rotten Tomatoes.[11]

The movie won the feature film Environmental Media Award in 1993, and in 2001 the Political Film Society gave the film its special award of the year.

So as we go forward into 2020 after the COVID19 plandemic they keep sending out the message through the boob tube everything will be different now. Big changes for our futures. Testing and vaccinations for everyone. Even if you are not sick. Constant testing.. FOR WHAT????

All Votes will be mailed in soon. Some states have now mandated that you need to sign and mail in ballots and return in the mail so they can match the signatures… BS…all votes will be fraud.

It doesn’t matter what party you choose. Your party will be chosen for you by a group. Doesn’t really matter any more who we vote for. Audios to the days of being baffled and buffaloed into thinking we actually choose that president…

You Wanted FREE CHEESE you Got It….

Check Out some of our previous stories