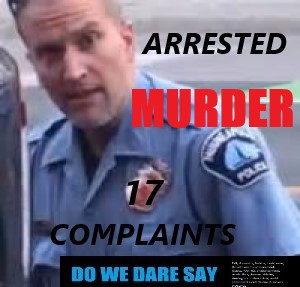 Prosecutors announce charges against one of the police officers involved in the 8 Minute Cold Blooded Killing of George Floyd.

Derek Chauvin is the named police officer in George Floyd’s death who has been fired and charged.

Hennepin County Attorney Mike Freeman announced charges of third-degree murder and manslaughter against now-fired Minneapolis police officer Derek Chauvin for the death of George Floyd. Freeman said the investigation continues and there could be further charges.

If there are no further charges and stronger charges we can assume that Hennepin County corruption will be protecting Derek Chauvin from 1st degree murder charges.

Where is the Minneapolis Police Cam footage?

As you know, 4 Minn. PD officers involved in the arrest were fired. Derek Chauvin, Thomas Lane, J. Alexander Kueng and Tou Thao. The Park Police officer was not fired . So where is the Minneapolis PD cops’ body cam footage, especially Chauvin? Why release only the footage from the Park Police Officer who was told to leave the immediate scene and directed to keep the others at bay from view.

George Floyd was an unarmed black man that was being detained in a suspected forgery incident.

It is a silent death when you have someone’s knee is on your neck constricting your airway.

This was 1st degree MURDER PERIOD NOT 3RD DEGREE.

Look at the officers face. He was getting pleasure from this. The officer is happy and smurking as he kills George Floyd.

As you can clearly see in the video and hear the man stating that he can not breath. The officer applies more pressure by moving his knee slightly and placing more pressure on his wind pipe that was already completely compromised. Causing the man to die instead of releasing the pressure so the victim could breath.

THIS WAS INTENTIONAL. THE VIDEO SAYS IT ALL.

Paramedics arrived on scene and the victim was already dead.

It’s incidents like this that tarnish the reputations of all the good officers.

U GOT IT BAD… SHUT THE DOOR FRIDAY

OUR WORLD TODAY, FIGURING OUT CORRUPTION AND DECEPTION 2020…

OUR WORLD TODAY, FIGURING OUT CORRUPTION AND DECEPTION 2020..
Well it seems someone turned on the spigot and its dumping every where.

MINNEAPOLIS POLICE MURDERED GEORGE FLOYD ON VIDEO AS HE BEGGED FOR AIR. THIS IS NOT ACCEPTABLE…

MINNEAPOLIS POLICE MURDERED GEORGE FLOYD ON VIDEO AS HE BEGGED FOR AIR. THIS IS NOT ACCEPTABLE…

TAKE IT TO THE LIMIT ON THIS MOODY MONDAY MADNESS

There are two videos in the article

Once again another incident involving “Deadly Force”. You can’t see or hear a ruckus of any kind going on this time.

George Floyd was an unarmed black man that was being detained in a suspected forgery incident. As you can see the man is not resisting arrest at the time of video. There are many unanswered questions.

It seems to me if you can be so relaxed that you can put your hands on your hips during an arrest and out right murder a man in cold blood as this officer did.

What warrants an officer to apply obstruction to the airway to cut off the mans breathing, there is no reason for this but police brutality for an out right killing of a black man by a racist police officer..

It is a silent death when you have someone’s knee is on your neck constricting your airway. It is a tactical move to take down your enemy and subdue them permanently.

The 2 police officers involved in this incident have been put on administration paid leave while the matter is investigated further by the FBI.

As you can clearly see in the video and hear the man stating that he can not breath. The officer applies more pressure by moving his knee slightly and placing more pressure on his wind pipe that was already completely compromised. Causing the man to die instead of releasing the pressure so the victim could breath.

Paramedics arrived on scene and the victim was already dead.

The officer should be arrested and charged with murder. His Partner that stood by and did not react to save the mans life should be charged with accessory to murder.

It’s incidents like this that tarnish the reputations of all the good officers.

Remember Eric Gardner died on the street in this similar way.

GOD ONLY KNOWS.. ROLLING ON THE RIVER SUNDAYS

DIDN’T WE ALMOST HAVE IT ALL…HUMP DAY MAGIC

DON’T LET ME BE MISUNDERSTOOD ON THIS MOODY MONDAY MADNESS

There WAS JESUS… ROLLING ON THE RIVER SUNDAYS

HOW CAN YOU MEND A BROKEN HEART…HUMP DAY MAGIC

Al Green
How can you mend a broken heart
1972

FUN WITH DICK AND JANE… THE MOVIE REVIEW

By: Chad Rhodes This was a fast moving funny comedy showing the downside of life when you get hit with unemployment. Fun with Dick and Jane Theatrical poster Directed by Dean Parisot[1] Produced by Jim Carrey[2]Brian Grazer Screenplay by Judd ApatowNicholas Stoller Story by Judd ApatowNicholas StollerGerald Gaiser Based on Fun with Dick and Janeby … END_OF_DOCUMENT_TOKEN_TO_BE_REPLACED

The Distinguished Gentleman… THE MOVIE REVIEW

By: Chad Rhodes This is a good starting place to learn all about the insider politick’ing ways. Tell me if this does not ring true for todays circus they call congress in 2020. Mean While In The Movie.. A Florida con man named Thomas Jefferson Johnson (Eddie Murphy) uses the passing of the longtime Congressman … END_OF_DOCUMENT_TOKEN_TO_BE_REPLACED

Video is at the end of the article

Ahmaud Arbery was hunted down and shot as he jogged through this neighborhood back in February. He was on a run which takes him 2 miles from his house into Satilla Shores, Georgia where the shooting happened.

The 2 white men who tracked and shot Arbery used the excuse he had committed a burglary in the neighborhood. There were no reported burglaries in their neighborhood. The WHITE SUPREMIST BIGGOTs go by the names of Gregory and Travis McMichael.

Arbery’s family has also called for William “Roddie” Bryan, the man who filmed the incident, to be arrested and charged in their son’s murder.

That brings me to my next comment on this.

George Barnhill, DA declined to arrest the two men who had shot Arbery. Georgia Bureau of Investigation is assisting Tom Durden (prosecutor) in the investigation. I think George Barnhill should be arrested and brought up on charges and to loose his license to practice law and never to be allowed to hold any such position of any power.

You may ask why hadn’t these two killers been arrested????

Gregory McMichael had recently retired as an investigator in the Brunswick district attorney’s office.. He had also worked as an officer in the Glynn County Police Department. BLUE GONE BAD… SO SAD.

I can remember when I was in the military and we were going to school in the south. We had gone into town and we were refused service and kicked out of the bar because we were a mixed group. We were a bag of skittles. Black, Mexican and white soldiers who went through an experience I will never forget. Since we were staying at the local motel across from the bar in town we decided to go get supplies and go back to the hotel. We had a great day at the pool and BBQ’d. It was about 7 pm and we were sitting out by the pool and the men from the bar came to our hotel and told us to go back in our rooms. Things were getting very out of control. So we went to our rooms and called the police. The men crashed down our doors and started a fight. Tossed over the TVs in our rooms. I ended up with a broken nose. The police came and the men that started this were not charged and we had to go back to base and we as soldiers had discipline charges. Crazy when town officials can tell lies and get away with it… By the way I am a white Guy…

The following are the current capital crimes in the state of Georgia:

Murder with one of the following aggravating circumstances:

The offender has a prior record of conviction for a capital felony;

The offender was in the process of committing another capital felony or aggravated battery, or the offense of murder was committed while the offender was engaged in the commission of burglary in any degree or arson in the first degree;

The offender committed the offense of murder for himself or another, for the purpose of receiving money or any other thing of monetary value;

The offender caused or directed another to commit murder or committed murder as an agent or employee of another person;

The capital offense was outrageously or wantonly vile, horrible, or inhuman in that it involved torture, depravity of mind, or an aggravated battery to the victim;

The offense of murder was committed against any peace officer, corrections employee, or firefighter while engaged in the performance of his official duties;.

The offense of murder was committed by a person in, or who has escaped from, the lawful custody of a peace officer or place of lawful confinement;

The murder was committed for the purpose of avoiding, interfering with, or preventing a lawful arrest or custody in a place of lawful confinement, of himself or another;

The murder was committed during an act of domestic terrorism.

Some of these aggravating factors apply also to rape, armed robbery, or kidnapping. However, in 2008, the U.S. Supreme Court ruled in Kennedy v. Louisiana, that the death penalty is unconstitutional when applied to non-homicidal crimes against the person. However, the ruling meant that crimes “against the state” such as treason or terrorism would not likely be unconstitutional. Therefore, the offences of treason and aircraft hijacking would likely be considered a crime against the state in Georgia and the death penalty in this case may be constitutional.

This is the video of Gregory and Travis McMichael hunting down and killing Ahmaud Arbery. May you rest in the arms of the lord. R.I.P.

SOMEONE YOU LOVED… SHUT THE DOOR FRIDAY

BRETT FAVRE INVOLVED IN WELFARE FUND SCANDAL.
It seems Brett Favre has been a very bad role model for our younger football fans.

PROPAGANDA PARANOIA, IT”LL DESTROY YOU… W.H.O. NEEDED YOU TO FEAR…

PROPAGANDA PARANOIA, IT”LL DESTROY YOU… W.H.O. NEEDED YOU TO FEAR…
Is the truth coming out… Time to pay attention.

I’d Rather Go Blind ON THIS MOODY MONDAY MADNESS

The Old RUGGED CROSS.. ROLLING ON THE RIVER SUNDAYS

YOURS… ROLLING ON THE RIVER SUNDAYS
Willie Nelson Twilight Time 2013

HUMORUS BS or ? YOU DECIDE…

By: Chad Rhodes Do We Dare Say Have we all become a product of control? Was this a practice run for what is to come? We really need to take a stand against the regime taking control of our country. Call all the Little CRA CRA Birdies Crazy, but as your bank accounts shrink to … END_OF_DOCUMENT_TOKEN_TO_BE_REPLACED

The answer as to whether or not we need to continue to stay at home and keep businesses closed is an emphatic “NO”.

PRESSURE ON THIS MOODY MONDAY MADNESS